A NEW MANAGEMENT AND NEW ADVENTURES FOR LOREDANA BERTE ‘

In April 2010, a bad fall forced her to undergo a complex surgery involving the insertion of a hip prosthesis, followed by a long hospitalization and a subsequent period of inactivity due to the painful post-operative recovery.

She will make her return on TV with the beautiful performance at “Ti lascio una canzone”, a show hosted by Antonella Clerici, live on Rai Uno from the Naples Auditorium. 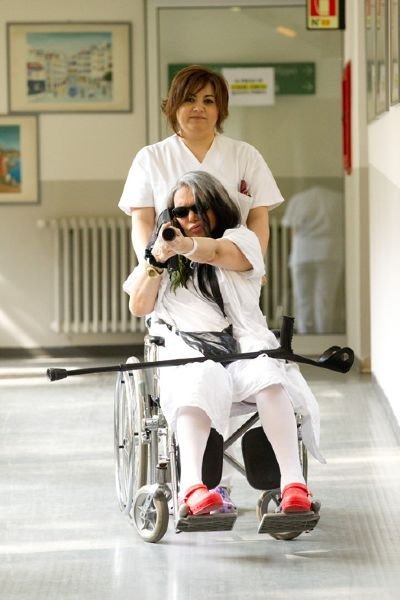 “I'm alive As the sun tells me”

She takes part in the Rai Uno TV show “I Raccomandati”, competing with some historical colleagues such as Fausto Leali and his historical friend Marcella Bella.

At the show “Amici” she performs the duet with Loredana Errore, ex-competitor of the talent show Amici di Maria De Filippi, in a song written by Biagio Antonacci entitled “Cattiva”.

In September 2011 she performed for the second time at “O’SCIA'”: the singing event held in Lampedusa (every year since 2003) created, desired and supported by Claudio Baglioni to raise awareness on the delicate issue of the immigration emergency that Italy has been facing.

I could already see myself coming out To be the queen”

In February 2012 Loredana competes in the SANREMO FESTIVAL paired with Gigi D’Alessio The song, called “Respirare” , reached the third position through televoting. However, the song then slipped to fourth place after the vote in the press room.

On June 1, 2012 the single “Ma quale musica leggera”, was released on iTunes, with words and music by Edoardo Bennato: a song that seemed sewn on to her.
Loredana finally concludes the year with her iconic “IO CANTO SOLA TOUR”. 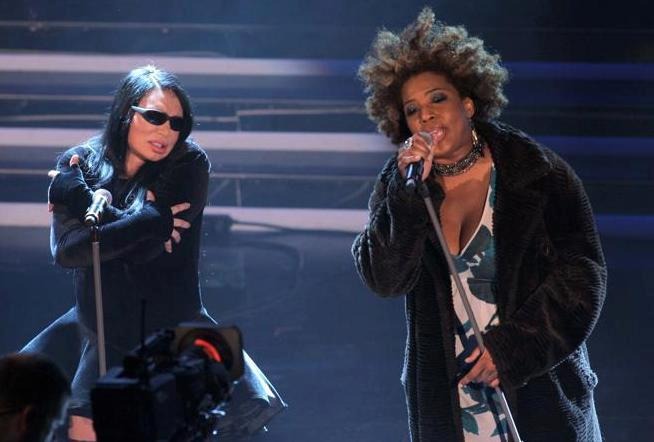 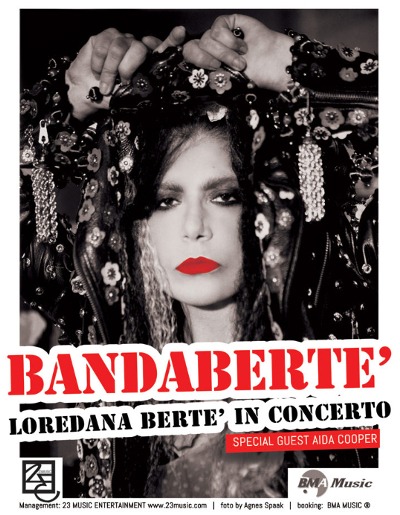 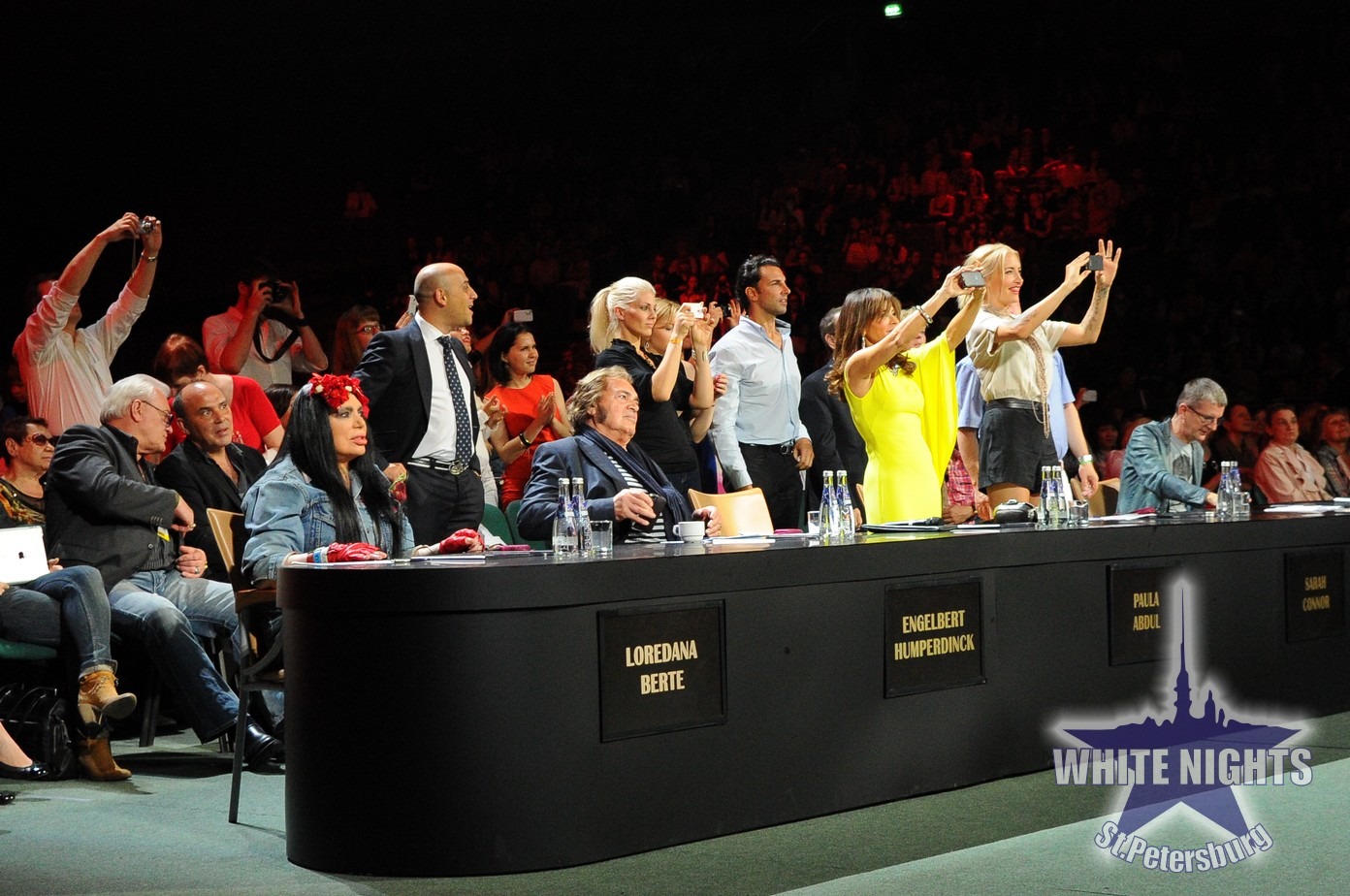 In fact, her manager, Francesca Losappio, sets up a new “Bandabertè” just to have Loredana as a headline for the show. The brilliant setlist of her concerts included her greatest hits such as “Non Sono una signora”, “Dedicato”, “Sei belissima”, “Il mare d’inverno”, “E la luna basso”, considered to be milestones in the history of Italian music.

During the tour, Loredana also makes a stop in Russia, where she performed as a juror and guest of honor (among others such as Bob Geldof, the Jacksons,Lou Bega, Paula Abdul) at a prestigious international festival broadcast by the first Russian TV channel. A triumphal return that was literally acclaimed by the large audience who came to see it, as well as by the newspapers present at the events.

A triumphal return indeed for Loredana, which was equally acclaimed by the largest audience who came to see her, at the first dates of the “BandaBertè Tour 2013”.

The first 40 years of career

From January 2014 the celebratory tour of her “first 40 years” of
career, the BANDABERTE’ TOUR 1974-2014, where Loredana celebrates exactly 40 years since the release of her first and scandalous album, “Streaking”(1974) surprising everybody once again : a prestigious theatrical tour sees her as the protagonist of the major stages, followed by a summer tour.

To embellish everything, on the background of the stage of her concerts, video projections began playing on a large screen to accompany and illustrate each song, following its history and meaning with an alternation of references and archive and current photos. 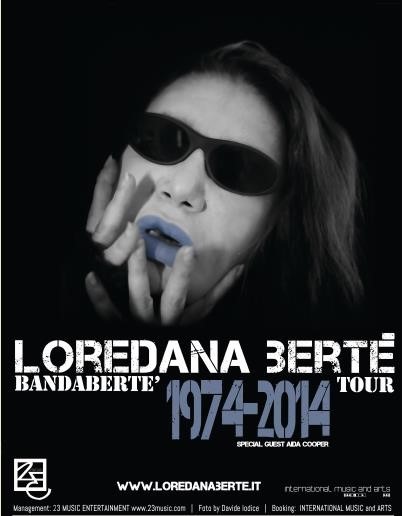 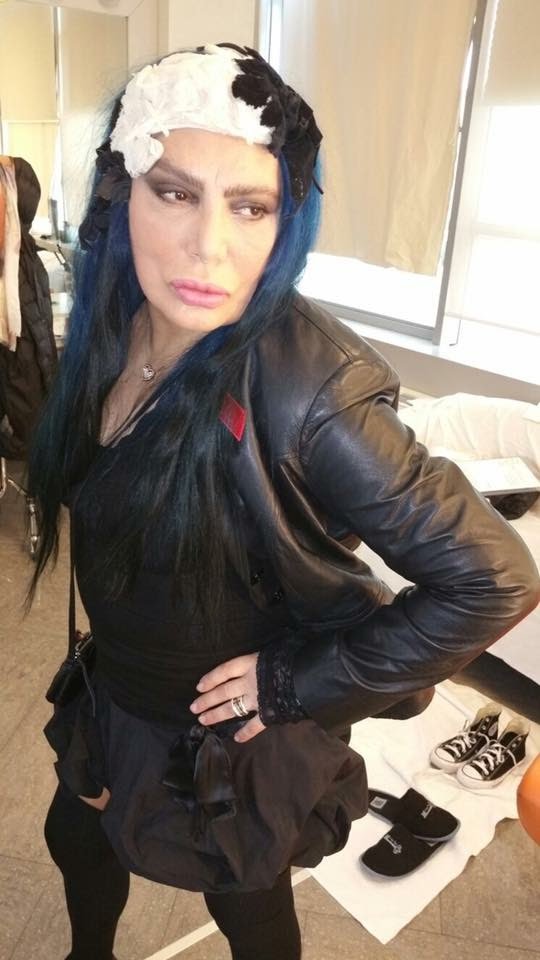 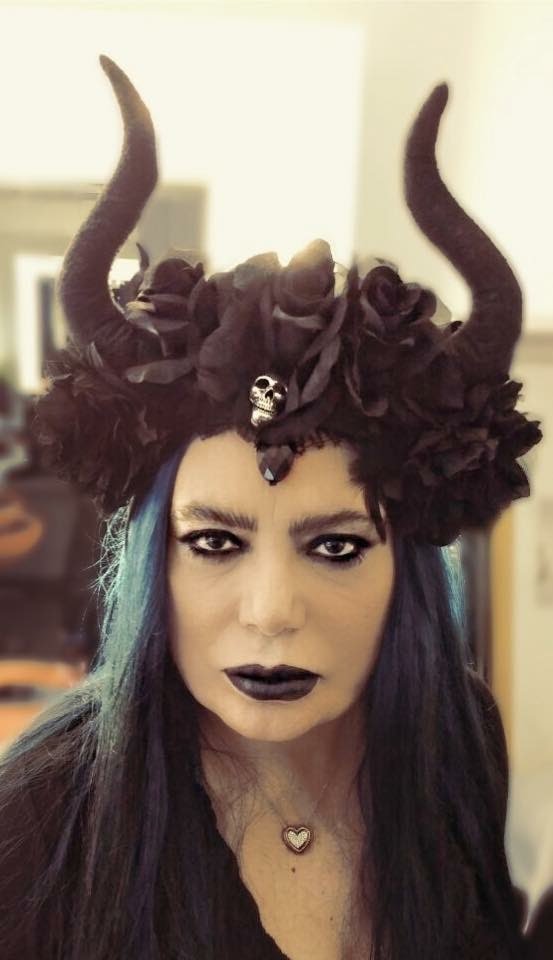 2015 was instead the year of the proclamation of Loredana Bertè as the “person of the year” as judge of the most important Italian talent, AMICI di Maria De Filippi.

The year could not have ended better than with the release of her first and only autobiography entitled: “TRASLOCANDO, è andata così” published by Rizzoli.

The book is a success: in weeks it’s placed in the 1st and 2nd place of the bestseller sales list on Amazon.

In 2016 the notorious punk artist amongst Italian singers, after two years of sold out dates for her Bandabertè Tour 1974-2014, finally returns in the music with a new album of duets and limited edition vinyl presses:

The latest ambitious work takes its name from the title of one of her successes presented in Sanremo in 1994, “Amici non ne ho”, combined with the fact that the credits are all strictly female: produced by Fiorella Mannoia and composed by the major Italian female performers who, to pay homage to Loredana, perform some historical duets with her.

The album inclued two unreleased tracks: “E’ andata così” and “Il mio funerale”.
“E’ andata così” was the leading single of the album, a song written for her by Luciano Ligabue.

A summer tour follows in which at each date one of her “friends” from the duets album will perform a live rendition of the songs. For this reason, the tour takes its name from the last part of the disc title: “Amiche sì!”-Tour 2016.

The tribute to Loredana’s 40-year career culminates on September 19th 2016with a concert-event at the Verona Arena called “Amiche in Arena”, conceived and created by Loredana herself in collaboration with Fiorella Mannoia, F&P, 23 Music, Bandabebè , Oya and IAM. The live concert will then be broadcast on Canale 5 in prime time as an opportunity to raise funds against femicide. The earnings from the event were in fact donated to the associationDi.Re: Donne in rete contro la violenza.

Loredana shares the stage of the Arena with all the collaborators from the latest album and also Gianna Nannini, who plays “America” together with Loredana(thus creating an event within the event). The Arena show will go completely sold out. 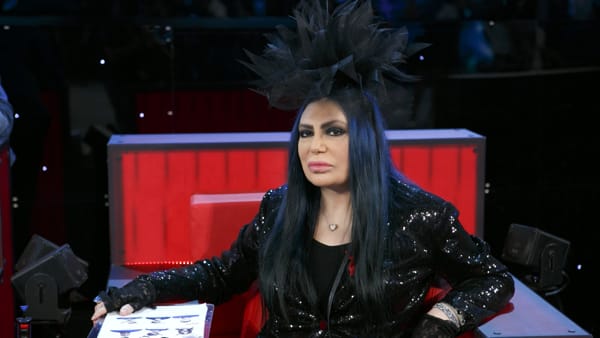 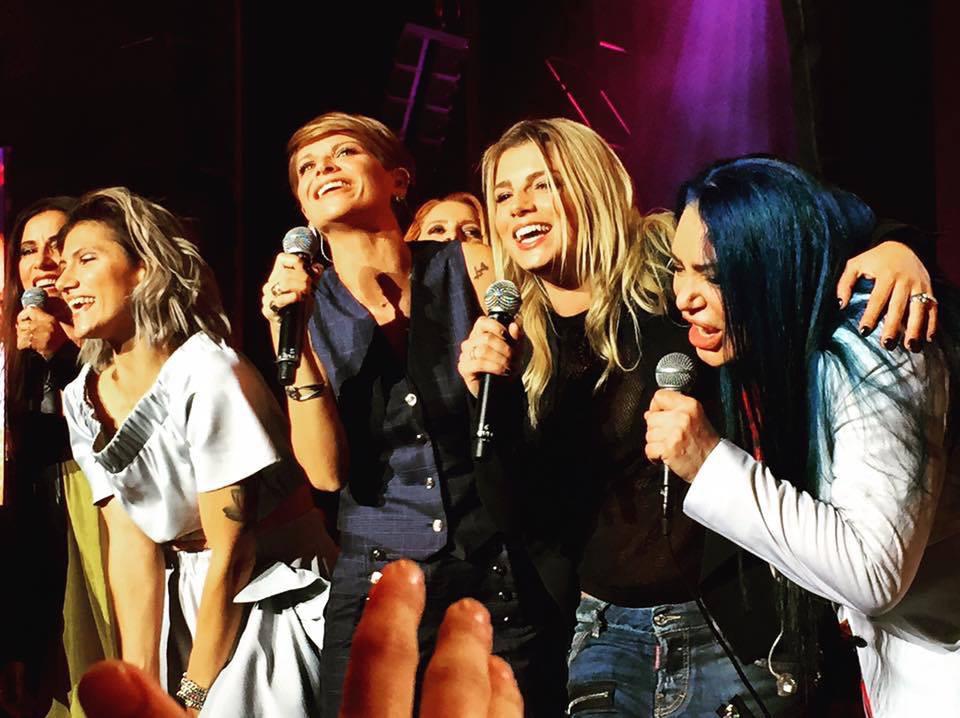 “It's joy that moves me towards dreams and future"

In the summer, she comes back to live performance in the “Amiche Sì! – Summer Tour 2017 “. The second part of the live tour series that started in 2016 is seen by over 200,000 spectators, making it one of the highest selling shows of all time.

On November 10th, the album Duets – Tutti cantano Cristina, a tribute album dedicated to the singer Cristina D’Avena is released. It contains a hit single with Loredana called“Occhi di Gatto”.

Loredana’s name manages to make its debut on the big screen. On November 24th the film “Call Me By Your Name” directed by Luca Guadagnino, whose soundtrack contains the song by Loredana Bertè “J’Adore Venise”, is released in the cinemas of the United States. The film garnered multiple Golden Globe nominations and won the Oscar for Best Non-Original Screenplay.

In the meantime, Loredana is working on her new album.

The last years have marked an artistic rebirth for Loredana Bertè.

“Don't ask me about the moon, I know her"

Main star ofsummer 2018 thanks to “Non ti dico no”, (song written in collaboration with Boomdabash), which stayed for weeks at the top of the most broadcasted songs on the radio and sales charts, winning prizes as a summer hit (Power Hits Award Rtl 102.5, Earone Award for song most broadcasted song ) and Gold and Double Platinum certifications. The music video for ”Non ti dico no” made more than 50 mln views on YouTube

“Non ti dico no” was also the first single from the new anticipated album “LiBertè” (2018)– produced by Luca Chiaravalli – out on September 28th on Warner Music, more than 13 years after her last studio album and it went straight on the top charts.

The cover was conceived by Loredana Berté herself, then photographed by Giovanni Squatriti, a renowned fashion and advertising photographer who boasts prestigious international collaborations including Louis Vuitton, Versace, Fendi etc. The cover looks are creations of the Gianluca Saitto Atelier.

The album was preceded by the release of 2 singles: “Babilonia” and “Maledetto Luna-Park”

“LiBerté” symbolized a vindication of a right to madness understood as Freedom. As wrote Aristotle: “There is no great genius without a touch of madness” LiBerté invites everyone to follow your own instincts, ignoring the rules and social conventions, and to develop your own ideas, your own morality and your own beliefs although, in order to succeed, we have to swim laboriously against the tide, even challenging what has already been written and established.

The songwriting process sees Loredana as the main author of the songs, in collaboration with artists that she has already previously worked with (such as Ivano Fossati and Maurizio Piccoli), young authors as Fabio Ilacqua and Gerardo Pulli and, for the first rime, a collaboration with a great artist such as Gaetano Curreri.

After the new record release, the artist kicked off the “Libertè Tour Theatrale 2018-2019 ′ ′ a theatrical tour that touched the most important Italian theaters and which dates went all sold out. The tour sees a brief interruption to partecipate to the latest edition of the Sanremo Festival. 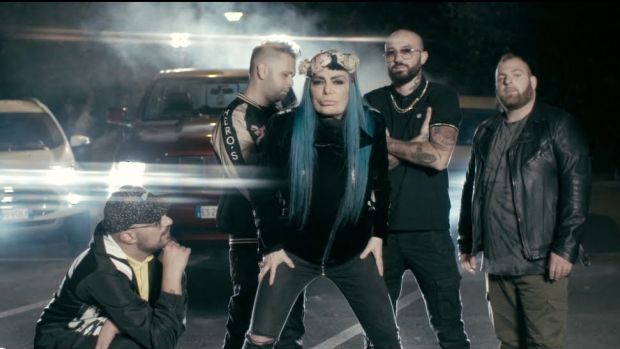 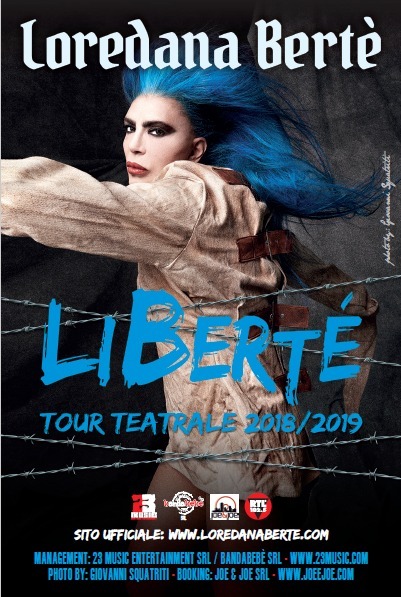 Placed in 4th place in the Sanremo ranking, however, she was elected by popular acclaim the “moral winner” of the Festival’s 69th edition.: with three standing ovations in a row (unprecedented in 69 years of Festival), during her performances on the Ariston stage, it was followed by whistles of disapproval from the audience towards the conductors and stadium choirs when his was not announced among the names on the winner’s podium. Everyone expected her to win

In spite of this, the song goes straight between the 1st and 2nd place of the most broadcast records on radio and TV.

Even the related video of “Cosa Ti Aspetti da me” (made by ConiglioViola), which sees a cartoon with the features of Loredana in the guise of a “gothic” version of a little red riding hood, turned out highly appreciated and has received almost 40 million views to date on the web.

LiBertè (Sanremo Edition, 2019), will be released on February 8th 2019as the repack of the album with the same name which also contains the success single performed at Sanremo “Cosa ti aspetti da me?” and two “goodies” for the fans: two live medleys from the homonymous theatrical tour.

After Sanremo, Loredana returns to play as the only judge for the talent showAMICI 18 di Maria De Filippi, earning the title of “revolutionary judge”.

Put aside her judge vest, the unstoppable Loredana resumes her summer tour,
named “Libertè – Summer Tour 2019”, which saw the singer playing in suggestive locations such as festivals and prestigious amphitheaters, ending at the end of September, marking another sold out tour.

After all this success, Loredana sees a longlife dream finally come true: to lend her voice for a movie character. And she does this for a beloved dark classic: The Addams Family. Loredana gives her voice to Grandmama (whose voice, in the US Version, is dubbed by Bette Midler!) In an animated version released on October 31st for Eagle Pictures, just in time for Halloween.

The film did so well that the distribution company announced a sequel in 2021.