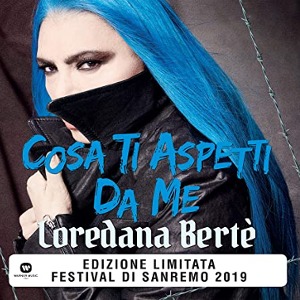 Released digitally on February 6th 2019 digitally, the single is contained in “Limited Edition Sanremo Festival 2019” and also in the reissue of the album LiBertè – Sanremo Edition (2019)

This song was presented at 69th edition Sanremo Festival.

Despite being placed in 4th place in the Sanremo chart, however, Loredana was elected by popular acclaim the “moral winner” of the Festival: with 3 standing ovations in a row (unprecedented in the whole history of the Festival), during her performance on the stage of the Ariston, as well as whistles of disapproval from the public towards the conductors and stadium choirs when hers was not announced among the names on the podium. Everyone expected her to win

In spite of this, the song goes straight to the 1st and 2nd place of the most broadcast records on radio and TV.

Even the related video of “Cosa Ti Aspetti da me” (made by ConiglioViola), which sees an anbimated character with the features of Loredana in the guise of a “gothic” version of a little red riding hood, turned out highly appreciated and has received almost 40 million views to date on the web.